We are very pleased to say that we won the Michael Marks Award for Publisher of the Year  on 25th November at a ceremony at the British Library.  The Michael Marks Awards have become over the past few years the principal award for poetry pamphlet publishers in the UK and have played a major part in the current renaissance of this very special form of poetry publishing which unites experienced and debut poet.   Samantha Wynne-Rhydderch, whose excellent Rack Press pamphlet, Lime&Winter was shortlisted for the individual pamphlet award (and which can be ordered online here) gave a characteristically spirited and accomplished reading from the pamphlet. The eventual winner of this category was Laura Scott for What I Saw (Rialto).

Rack Press is a Welsh poetry imprint that next year celebrates its 10th birthday when we will have published 34 poets.  We are planning for 2015 readings, events and a full programme of new pamphlets.  It promises to be an exciting year for the Press.

Our philosophy is to publish high quality, well-crafted poetry in attractively designed editions and to ensure that we always publish side by side experienced poets and debut collections and that we have equal numbers of male and female poets.

We favour poetry that engages with the world of politics and current events as well as lyric poetry and, as the only Welsh pamphlet publisher ever to have been shortlisted in any category since the inception of this Award, we take very seriously our commitment to Wales and to the Welsh poetry and cultural scene.

This year we published six pamphlets, and launched a new venture of short prose books under the imprint Rack Press Editions, the first title of which, Bloomsbury and the Poets, described by The Spectator as ‘a delight’, has sold well and has provided the Press with a welcome extra revenue stream.

Rack Press has taken part in readings in Wales and elsewhere and we are keen to do everything we can to widen the audience for serious poetry.

In the end our publishing philosophy is about bringing quality work to the attention of as many people as possible, in attractive form, with an emphasis on craft, and with a belief in the poetry pamphlet not as a ‘nursery slope’ publication nor as a sideline for established poets but as a significant genre in its own right that presents coherent short collections, themed sequences, and individual long poems in a perfectly satisfying format. 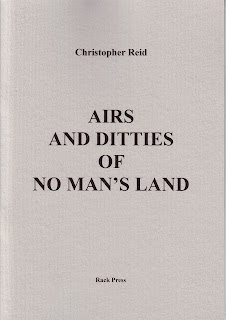 We are pleased to see that the new CD, No Man's Land, by Colin Matthews from Hallé has appeared and it contains the piece composed to words by Christopher Reid published as a Rack Press pamphlet in 2011 (sadly now out of print but reproduced in Christopher's 2012 Faber collection, Nonsense).  In some interesting programme notes to the CD which I am sure Colin will not mind our reproducing here, he explains the background to the piece:-

"No Man’s Land follows on from my very positive collaboration with Christopher Reid on Alphabicycle Order 2 several years ago. The origin of the work was a call from Richard Hickox in November 2008, full of his usual bubbly enthusiasm and proposing a Proms commission to celebrate the City of London Sinfonia’s 40th birthday in 2011. Like everyone, I was shocked to learn of his sudden death three days later. Richard conducted my first ever Proms performance, in 1983, and clearly the work had both to be written in his memory and take a different direction from his original suggestion of a celebratory work.  I have been obsessed with the First World War for many years, long before the centenary of its outbreak came into view (one reason being that my maternal grandfather died on the Somme). But it is no easy subject to treat musically. Although I set Edmund Blunden in Aftertones I have avoided trying to set other war poets, particularly with the example of Britten and Wilfred Owen in mind. When I asked Christopher Reid to provide the text for this work I suggested the concept of a soldier in the midst of war, almost unaware of what he’s found himself a part of. In the event his sequence of poems provided something both different and unexpected: we hear the ghosts of two soldiers hanging on barbed wire in no man’s land. ‘To pass the time, we let the wind/rummage in the hollows of our skulls/for memories and scraps of song and wisps of rhyme’. Although there are elements of dialogue in the piece, and towards they end they sing together, they see the war for the most part through different eyes. The reflective Captain Gifford is contrasted with the moredown-to-earth Sergeant Slack both by language and by the music they sing, with the sergeant’s music embracing both an invented vernacular and original songs and marches from the period, including recordings made in 1914."