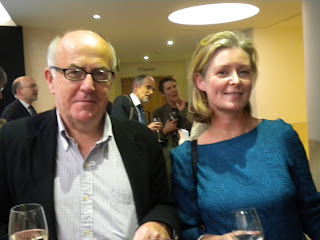 Róisín Tierney’s poetry collection Dream Endings has won the 2012 Michael Marks Award for the year’s best poetry pamphlet.  Rack Press was also shortlisted for the 2012 Michael Marks Publisher's Award (won on the night by Yorkshire publishers Smith Doorstop).  In addition to the prize of £5000, Róisín (seen here at the awards ceremony at the British Library with publisher Nicholas Murray) has won a place on the Harvard poetry school this summer in Greece.

The winner was announced at a ceremony at the British Library on 22nd June. It is the first time since the award was launched four years ago that a Welsh publisher or poet has been shortlisted.

When the shortlist for publisher of the year was announced, the judges said: "Rack Press, run by Nicholas Murray  and based in Powys, is notable for its beautifully minimalist, elegant pamphlets. Whilst the appearance of each is identical - a slim volume with simple typography on high-quality cream laid paper - Rack's published poets have a real diversity of style. Murray states that he believes 'in the poetry pamphlet as the natural vehicle for the single poem or sequence' and the judges felt that this was particularly effective in this year's Rack Press pamphlets.”

Dream Endings has very nearly sold out but a reprint has been arranged and it can be ordered now online here.

Praise for Reid and Tierney in the TLS

Two of the four Rack Press pamphlets published in 2011 and submitted for the 2012 Michael Marks Award are reviewed in the Times Literary Supplement today.  Christopher Reid's Airs and Ditties of No Man's Land [sold out now but to be reprinted in the autumn in his new collection, Nonsense] is described as "one of several fine offerings from Rack Press this year" and its dialogue commended as well as its "almost Gilbertian panache".  Róisín Tierney's Dream Endings [shortlisted for the 2012 Michael Marks Award for pamphlet of the year] is also welcomed by the reviewer, Andrew McCulloch.  The remaining poets of the 2011 Rack season [18 months has become a normal time scale for poetry reviews to appear, it seems] that the reviewer didn't mention are Angela Topping's Catching On, a fine tribute of poems to the Liverpool poet, Matt Simpson, and Nicholas Murray's Burns-style political diatribe, Get Real! [also sold out but reprinted in his recent Acapulco: New and Selected Poems (Melos) and available online].
Posted by Rack Press at 10:28 No comments: 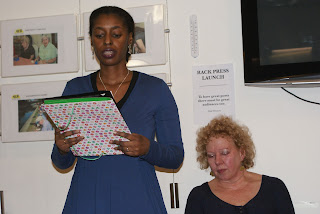 We are delighted to announce that Rack Press poet Denise Saul has won the annual Geoffrey Dearmer Prize for the best poem in Poetry Review during 2011 from a poet who has not yet published a full length collection.  The poem, "Leaving Abyssinia" was first published in Poetry Review and is now in her Rack Press pamphlet, "House of Blue", a pamphlet which has also been recommended by the Poetry Book Society in its summer selection for 2012.  The pamphlet can be ordered online from this site.

Latest Review of 2012 Series of Pamphlets

A very nicely written and perceptive review of the latest 2012 series of Rack Press pamphlets has appeared online at Sabotage Reviews.  It is written by poet Angela Topping.  Check it out!
Posted by Rack Press at 13:49 No comments: 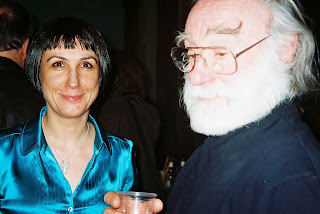 We are very sad to hear of the death of Dai Vaughan, an outstanding film editor, a brilliantly original writer of fiction and a poet whom we were proud to have published.  A very few copies of his pamphlet Inconsequences are still available.  Here he is pictured at a Rack Press launch in Bloomsbury with fellow Rack poet Hazel Frew in 2007.
Posted by Rack Press at 22:03 No comments: