It is good to see yet more positive reviews of the 2008 Rack Press titles. The latest issue of Poetry Wales reviews all three pamphlets by Byron Beynon, Steve Griffiths, and David Wheatley and the latest issue of Poetry London reviews David Wheatley's Lament for Ali Farka Touré, welcoming the way it begins "cheekily, lyrically, delightfully" and calling the pamphlet "an attractively produced limited edition".

Congratulations to Steve Griffiths, also, whose latest full length collection, An Elusive State: entering al-Chwm is just published by Cinnamon Press Rack Press is proud to have published earlier this year his collection Landing which broke a long silence and we understand there is even more to come!

Cinnamon describe the collection as follows:-

"A man hits fifty. He grew up surrounded by a belief in progress. Now he, and the world
around him, are not so sure. He creates a Utopia to comfort himself. Steve Griffiths's
cycle of poems, Al-Chwm, tells the story of the life and death of an imaginary utopia.
The cycle began with a vision in the province of Granada which merged a twilight in the
hill town of Montefrio with one in Griffiths's home village in Anglesey, North Wales, as
the lights came on one by one. Al-Chwm, first heard on Radio Three in 2006, is a
parallel universe, a magical epic, a comfort, a mystery."
Posted by Rack Press at 10:55 No comments:

Rack Press publisher Nicholas Murray will be reading from his own 2006 collection, The Narrators and from new work at

On Monday 13th October at an event hosted by John Francis Phillimore of Old World Books. The event is open to all.
Posted by Rack Press at 09:53 No comments: 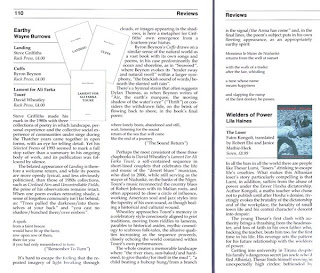 The leading Welsh magazine Planet recently reviewed all three Rack Press 2008 titles and there was praise for all the poets.
Posted by Rack Press at 09:49 No comments: