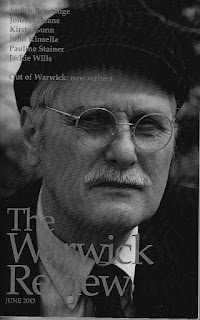 In these exiguous times for poetry reviewing when many major collections go unreviewed it is always nice to get good review coverage and two of the new 2013 Rack Press pamphlets, by Ian Pople and Susan Grindley [you can order both of these here] are warmly reviewed in the latest Warwick Review No 2, June 2013.  In addition to these two we published this year Rosalind Hudis's Terra Ignota and Ian Parks's The Cavafy Variations and also, this month, David Harsent's Songs from the Same Earth all of which are available for purchase here and have received a very good reception.
Posted by Rack Press at 12:08 No comments: 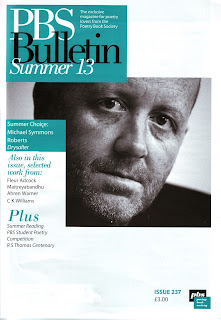 The Summer Bulletin of the Poetry Book Society has arrived and in it Ian Parks' Rack Press title, The Cavafy Variations, which is a PBS Summer Pamphlet Choice, is reviewed.  The anonymous reviewer says that Ian has "a fine ear for underplayed vowel music, and knows how to keep a line rhythmically taut" and makes some very interesting and perceptive comparisons with the work of other translators.  An excellent review of an excellent pamphlet which can be ordered here now.

You can join the Poetry Book Society by visiting their website www.poetrybooks.co.uk
Posted by Rack Press at 08:10 No comments:

Songs from the Same Earth Triumph at Aldeburgh Festival

Sir Harrison Birtwistle's setting of David Harsent's Songs from the Same Earth (the text published yesterday by Rack Press) was premiered last night at the Aldeburgh Music Festival at Snape Maltings Concert Hall and received a rapturous reception from the audience.

At a pre-concert talk in the Peter Pears Recital Room, introduced briefly by Rack Press publisher Nicholas Murray, David Harsent read the entire sequence before taking part in a discussion with Harrison Birtwistle chaired by Tom Service.  Harry (as he appears to be universally known) revealed that he is a great reader of poetry but confessed with his dry Lancastrian humour that: "Poetry has to be a suitable case for treatment; it's only any good to me if it can be set to music." David Harsent said that Harry had a "great sensitivity to the text" and "a fantastic sense of theatre" which was clear from the subsequent performance given by the outstanding tenor Mark Padmore.  Both composer and poet admitted that they tended to work intuitively, without a pre-existing plan, and all the ingenuity of interviewer Tom Service was required to get the two to explain how they worked together.  That they did do so was clear from the piece itself. With a fine intuitive sense of the urgencies of product placement Harry waved his Rack Press pamphlet of the poems around as he tried to explain how he came to write the concluding musical section.  We were too bashful to photograph this moment. The concert was recorded for transmission later this year on Radio 3.
Posted by Rack Press at 18:24 No comments:

We are delighted to announce the publication of David Harsent’s striking new sequence of poems, Songs from the Same Earth, to co-incide with the Aldeburgh Festival première on 13th June of Harrison Birtwistle’s setting of the poems.
The piece is a Royal Philharmonic Society/Britten-Pears Foundation commission to celebrate the centenary of the birth of Benjamin Britten and the bicentenary of the foundation of the Royal Philharmonic Society. The piece will be performed by Mark Padmore (tenor) and Till Fellner (piano).
The protagonist of Songs from the Same Earth is a woman in crisis. The sequence gives us glimpses of the uncertain and menacing world she inhabits.
David Harsent has published ten collections of poetry. The most recent, Night, was Poetry Book Society Choice for Spring 2011 and won the Griffin International Poetry Prize, as well as being shortlisted for the Forward Prize (Best Collection), the T.S. Eliot Prize, and the Costa Poetry Prize.
His work in music theatre has involved collaborations with a number of composers, but most often with Harrison Birtwistle, and has been performed at the Royal Opera House, Carnegie Hall, the Proms and on Channel 4 TV.
Songs from the Same Earth will be available here to purchase online from Thursday 13 June
Posted by Rack Press at 07:19 No comments: