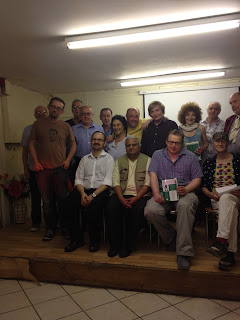 23 poets, including the inimitable Michael Horovitz were at Centreprise Bookshop last night in Hackney for the launch of The Robin Hood Book: Verse Versus Austerity (Caparison) a collection of poems and prose edited by Alan Morrison and Angela Topping (copies of whose Rack Press pamphlet Catching On are still available here). Rack Press poets Ian Parks and Nicholas Murray read from their contributions to the anthology and we were pleased to see another voice from Wales, Mike Jenkins who read an excellent poem in Merthyr dialect.  The book can be obtained from www.the recusant.org.uk
Posted by Rack Press at 07:47 No comments:

Get Real!, the 2011 Rack Press pamphlet by Nicholas Murray, is reviewed positively in the latest issue of the estimable Poetry Wales (Summer 2012, 48 (1)) by Steve Hitchins who describes it as a "rhyming rant" which the author certainly wouldn't dispute. Written in response to the events surrounding the formation of the coalition government in 2010, Get Real! is done in a Burns-style stanza though the very strict metrical form resembles most closely that used by W H Auden in the 1930s in his poem "Brothers, when the sirens roar".  It is unfortunately sold out but the entire poem is included in Nicholas Murray's new poetry collection, Acapulco: New and Selected Poems (Melos) and it can be ordered online from Melos.  Hurry and buy now before the Coalition dissolves!
Posted by Rack Press at 09:35 No comments: