Four exciting new poetry pamphlets from Rack Press, the Welsh poetry pamphlet publisher which last year was shortlisted for the Michael Marks Award, will be launched on 24th January. The four titles are:- 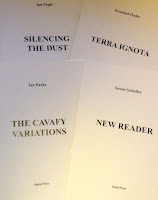 The pamphlets can be ordered here online using the Paypal button.

New Reader, by Susan Grindley
Susan Grindley’s poems have been published in Magma, Rising,
Nth Position and The Page and in anthologies including Gobby
Deegan’s Riposte (Donut Press, edited by John Stammers), for
which she wrote the title poem. She has had poems highly
commended in the Edwin Morgan International Poetry
Competition, 2010 and the Larkin and East Riding Poetry
Competition, 2011.
‘Susan Grindley’s poetry is the product of a wonderful
combination of a delicate poise and an acerbic ear. Her poems
are often personal and whilst they carry a gravity of feeling can
at the same time astonish and delight with her capacity to touch
on the subtlest nuances of the human experience. She is a
refreshing addition to our poetic lives.’ - John Stammers

Terra Ignota, by Rosalind Hudis
Rosalind Hudis is a former musician turned writer. She lives
near Tregaron, in West Wales, where she is studying for an MA in
Creative Writing at University of Wales Trinity St David,
Lampeter. Her poems have appeared in a variety of leading
journals and anthologies and she has won a number of awards,
including the 2011 Wilfred Owen Bursary, and a commendation
in the 2011 National Poetry Competition and a commendation in
the 2012 Poetry London competition. She is developing a
full-length collection.
Terra Ignota explores the shifts in perceptual boundaries when
we are swung away from a known and comfortable reality into
one that is darker and unmapped. Such ‘ruptures’ or
dislocations are themselves metaphors for the way poetry can
shock us into unexpected re-imaginings of our interior and
exterior terrains.
‘Exact, visceral and meticulously honed, Terra Ignota combines
a sensual attention to detail, perfect sense of place and a deeply
humane sensibility. Rosalind Hudis is fresh, distinctive voice
who understands the rhythms of words and how to perfectly
balance their ‘stored codes’ with what must be left unsaid. An
accomplished and exciting debut.’- Jan Fortune


The Cavafy Variations, by Ian Parks
Ian Parks was one of the Poetry Society New Poets in 1996. His
collections include Shell Island (2006), Love Poems 1979-2009,
The Landing Stage (2010) and The Exile’s House (2012). A Paston
Letter was published by Rack Press in 2010. His poems have
appeared in Poetry Review, The Times Literary Supplement,
Modern Poetry in Translation, The Observer, The Independent on
Sunday, London Magazine and Poetry (Chicago). He was a
2012 writer in residence at Gladstone’s Library and is currently
the Royal Literary Fund Writing Fellow at De Montfort
University, Leicester.
‘Cavafy’s versatile rhythms are almost impossible to replicate in
English – but Parks has both an empathetic sensibility and a rare
literary dexterity all his own. He is a true original as Cavafy was
a true original: to see one refracted through the other is quite
extraordinary.’ - Rory Waterman


Silencing the Dust, by Ian Pople
Ian Pople was born in Ipswich. He was educated at the British
Council, Athens and the Universities of Aston and Manchester.
His first book of poetry, The Glass Enclosure, (Arc, 1996) was a
Poetry Book Society Recommendation and short-listed for the
Forward Prize for Best First Collection. His other collections are
An Occasional Lean-to, (Arc, 2004), My Foolish Heart
(Flarestack, 2006) and Saving Spaces (Arc, 2011). He teaches at
the University of Manchester.
‘...meticulously crafted... combining movement and search with
resting-points of sharply-seen detail...’ - Carol Rumens PN Review
‘Ian Pople ... offers a poetry that George Herbert would have
appreciated and even employs some of his gestures. [Pople’s]
gift is for the salty lyric: uncompromising, unshowy, alert to the
resonance of the ordinary.’ -  John Greening Warwick Review