We are pleased to announce an Autumn Poetry Reading:
Rack Press and invited Poets
20th November 2012.
Martina Evans Nicholas Murray Cliff Forshaw
Róisín Tierney Luke Heeley Liz Berry
Venue: The Horseshoe, 24 Clerkenwell Close, Clerkenwell,
London EC1R 0AG.
Time 7pm. Entrance: Freeb
Directions: http://www.beerintheevening.com/pubs/s/29/29428/Horseshoe/
Clerkenwell
Martina Evans is a poet and novelist. Her collection Facing the Public (2009) was a TLS Book of the Year and
received the Piero Ciampi International Poetry Prize in 2011. Rack Press brought out her pamphlet Oh Bart earlier this
year. A book-length prose poem, Petrol was recipient of a Grants for the Arts Award and was published by Anvil Press
in September 2012.
Nicholas Murray’s most recent collection is Acapulco: New and Selected Poems (Melos) and he runs the Welsh poetry
pamphlet imprint Rack Press which was shortlisted this year for the Michael Marks Award for poetry pamphlet
publisher of the year. His previous collections include Get Real! a verse satire on the coalition Government and The
Narrators – both from Rack Press."
Cliff Forshaw lives in Hull where he teaches at the university. His collections include Trans (Collective Press, Wales,
2005), and the chapbooks Wake (Flarestack, 2010) and Tiger (HappenStance, 2011); Vandemonian, is due from Arc in
2012. He has held residencies in Romania, Tasmania and California, twice been a Hawthornden Writing Fellow, and
won the Welsh Academi John Tripp Award. He is also a painter and film-maker. http://www.cliff-forshaw.co.uk/
Róisín Tierney is an Irish poet based in London. She read as part of the Poetry Ireland Introduction Series in June
2008. Her work has won many prizes and is published in several pamphlets, the most recent being The Art of Wiring
(Ondt & Gracehoper, 2011) and Dream Endings (Rack Press, 2011). Her first solo publication, Dream Endings (Rack
Press), won this year’s Michael Marks Pamphlet Award. www.roisintierney.blogspot.com
Luke Heeley grew up in Lincolnshire and now lives in south London. The winner of an Eric Gregory Award, his work
has appeared in The Times Literary Supplement, The Wolf, The Rialto and the anthologies Ask for It by Name, The Art
of Wiring and Psycho Poetica. He also won the 2011 Crashaw Prize for Poetry. His debut collection Dust Sheet is due
from from Salt Publishing in December.
Liz Berry was born in the Black Country and now lives in London where she works as an infant school teacher. She
received an Eric Gregory Award in 2009 and her pamphlet The Patron Saint of Schoolgirls was published as the winner
of the Tall-Lighthouse prize in 2010. Liz won first prize in this year’s Poetry London Competition.
www.lizberrypoetry.co.uk

Following a very positive review of the four 2012 Rack Press pamphlet titles in the Poetry Review (see post below) we were pleased to see another perceptive review of Dan Wyke's pamphlet, Spring Journal on the Rogue Strands blog.

Copies of Dan's pamphlet are still available and can be ordered online here by clicking on the panel to the right.
Posted by Rack Press at 08:10 No comments:

Poetry Review on the Rack Poets

We were very pleased to read an excellent review by David Morley, in the latest Poetry Review, of the 2012 batch of Rack Press pamphlets.  Here it is:- 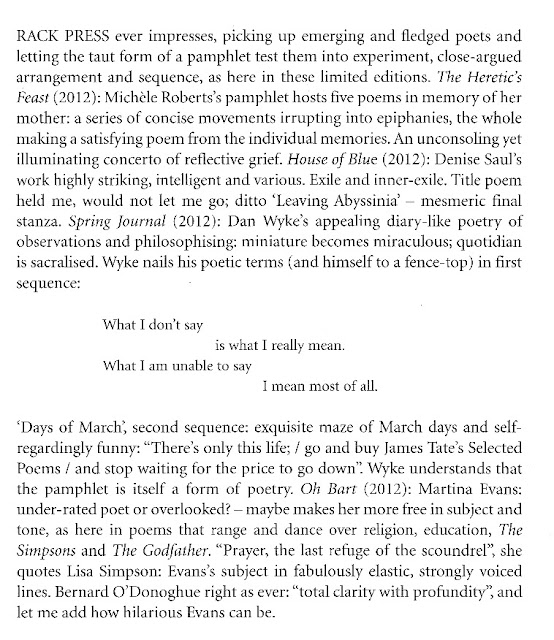 A Poem for National Poetry Day

To celebrate National Poetry Day here is a poem from one of the earlier Rack Press pamphlet collections, Inconsequences (2006) by Dai Vaughan who sadly died earlier this year.  Known as a documentary film editor and the author of imaginative and innovative fiction he also wrote poetry and we were very pleased to be able to publish this collection. [It is now out of print.]

In the tall tree,

At the green fern

And in due time

The mimes of fear.